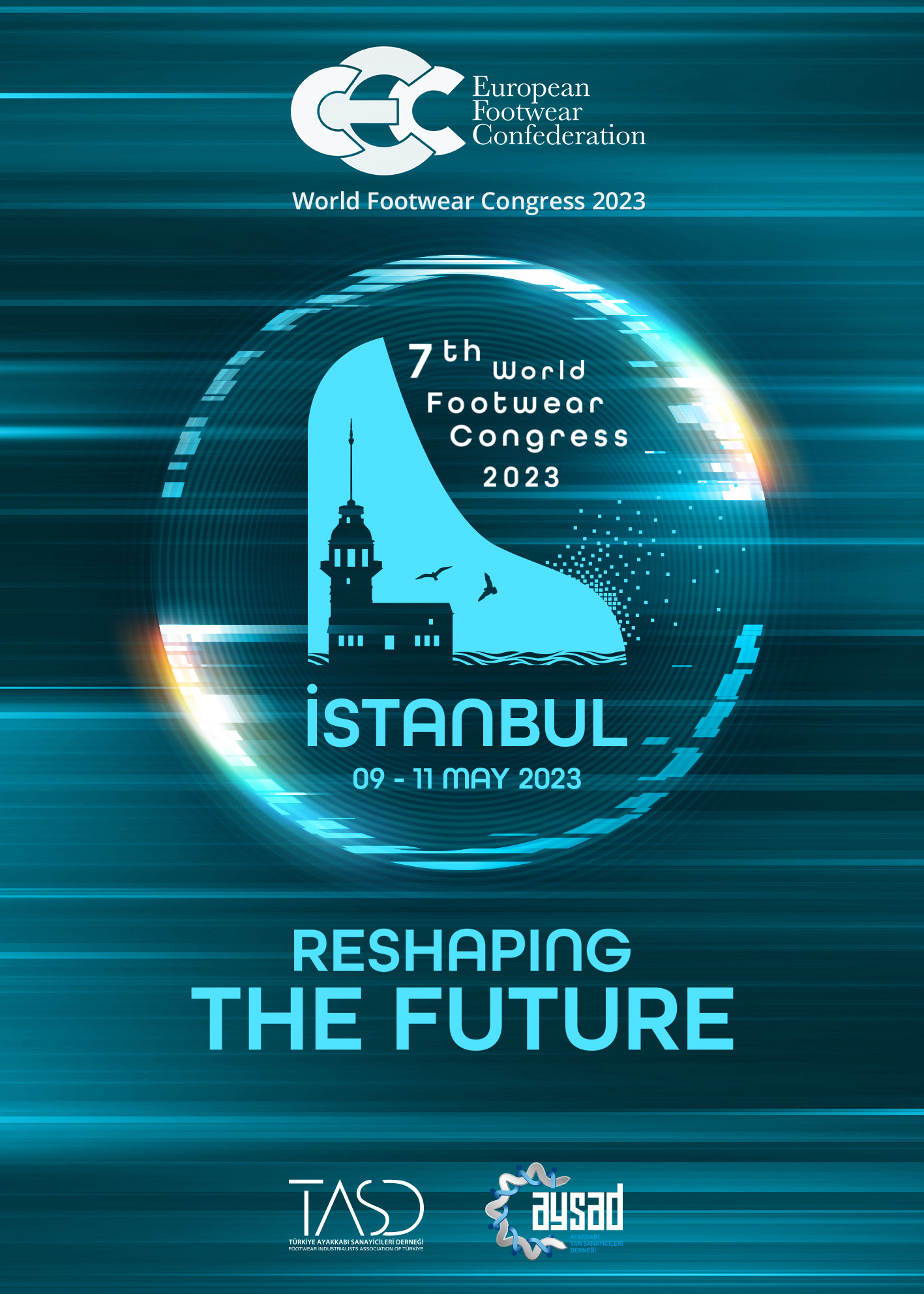 The 7th Congress will take place in Turkey from the 9th-11th May 2023. It will be co-organised by the Footwear Industrialists Association of Turkey (TASD), the Turkish Footwear Industry Suppliers Association (AYSAD) and, the CEC. It will be held in Istanbul, a city which has always been the bridge between Europe and Asia, and serves as a reminder of the need to work together rather than continuing with trade barriers and protectionism. Moreover, Turkey is among the world’s top footwear producers and exporters, with Istanbul gathering a large part of the industry.

The Congress will be dedicated to “Reshaping the Future” of the footwear industry, and will analyse among others, the latest consumer, who has become more conscious than ever about what to buy and how to contribute to a better planet and his wellbeing. From the business perspective, discussions will address how footwear companies can use the latest digitalised innovations and new technologies to reshape their corporate strategies, increasing transparency and collaboration, and attracting the younger generations to join the sector.

The European Confederation of the Footwear Industry (CEC) is the political voice of the major national footwear associations and federations of the European Union (EU). CEC’s overall objectives are to facilitate the development of a conducive environment within the EU for the manufacturing of footwear, and to reinforce the competitiveness. and growth of the sector.

In 2003, the CEC created the World Footwear Congress (WFC) as a platform for discussing the rapid changes, challenges and opportunities that this dynamic industry faces in the global economy. The Congress serves particularly to promote a free and fair global market with equal possibilities for all on a reciprocal basis, while increasing international collaboration within the latest trends and drivers influencing the industry and society.

The Congress is opened to all categories of worldwide stakeholders shaping the footwear sector (manufacturers and retailers, sector associations, technological and educational centres, policy makers, journalists, etc.), but the main and final beneficiaries are intended to be footwear businesses, the engine of a healthy economy.

The first three editions of the Congress took place in Europe – April 2003 and April 2005 in Brussels, Belgium, and April 2007 in La Rioja, Spain– with the aim to engage European institutions and national public authorities to support the footwear sector. Having been held in Europe, the Congress looked at other footwear relevant geographical zones around the world with a view to strengthen worldwide collaboration and increase market opportunities for the footwear businesses. As a result, in November 2011, the Congress took place in Rio de Janeiro, Brazil, with an attendance of approximately 450 people, and in November 2014, the Congress was held in León, México, with more than 600 participants from 32 countries.

The Congress planned for 2017 was postponed due to the increased risk of terrorist attacks. In 2019, the Congress returned to Europe, more specifically to Naples in Italy, attracting more than 500 attendants, with the title “Digitalisation for a sustainable footwear industry”, which echoed how digitalisation and sustainability had become an integrated part of the global marketplace in which businesses operate.

As from 2020, a series of unprecedented events have reshaped the world and the way we look at it.  Starting with the still lingering COVID pandemic we saw transport distortions resulting in delays and shortage of materials. Then followed the illegal and unjustified invasion of Ukraine in February 2021 that triggered an energy crisis and led to the highest inflation rates in decades. We are also more and more experiencing the effects and natural disasters of global warming. We face a new era in which collaboration, transparency and trust are more important than ever. Thus, 2023 is the year for the world footwear community to gather again in the 7th edition of the World Footwear Congress to assess what can we do to face and take advantage of this tsunami of events.